100 Times Journal on Monday by France Papillon, so here's my step by step tutorial.

I wanted to make a spread in my large Dylusion journal and started by picking out two doublesided papers. 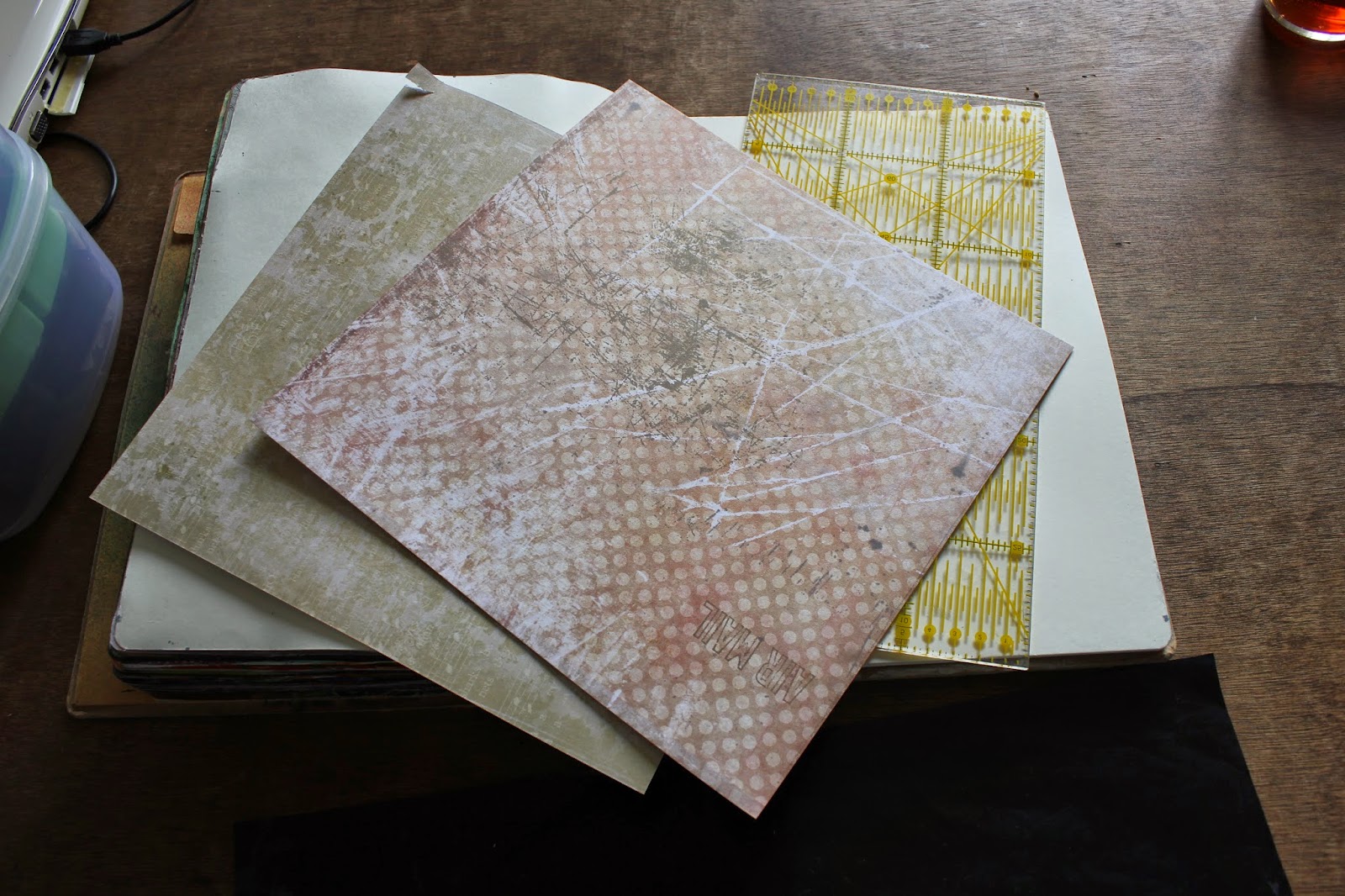 I cut various strips and ended up using only three of the four sides, because one side had some purple in it which I didn't like in combination with the others. I distressed the strips with Stazon since I knew I would be using wet mediums afterwards and didn't want my distressing to run. 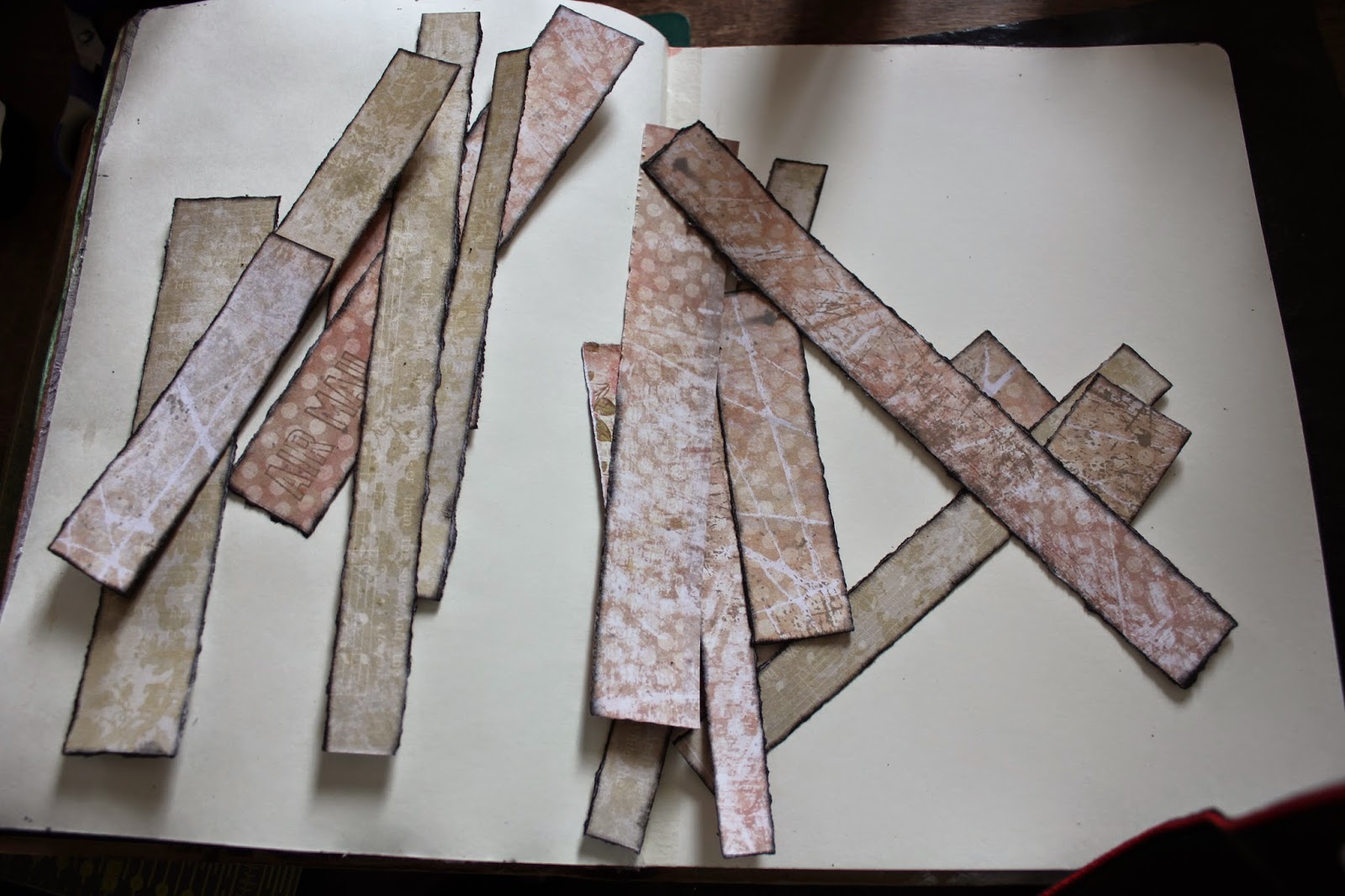 I moved the strips over my pages until I had an arrangement which I liked. Then I glued them down with Tacky Glue. I didn't use gel medium because I wanted to work with Bister and the gel medium would work as a resist which I didn't want. 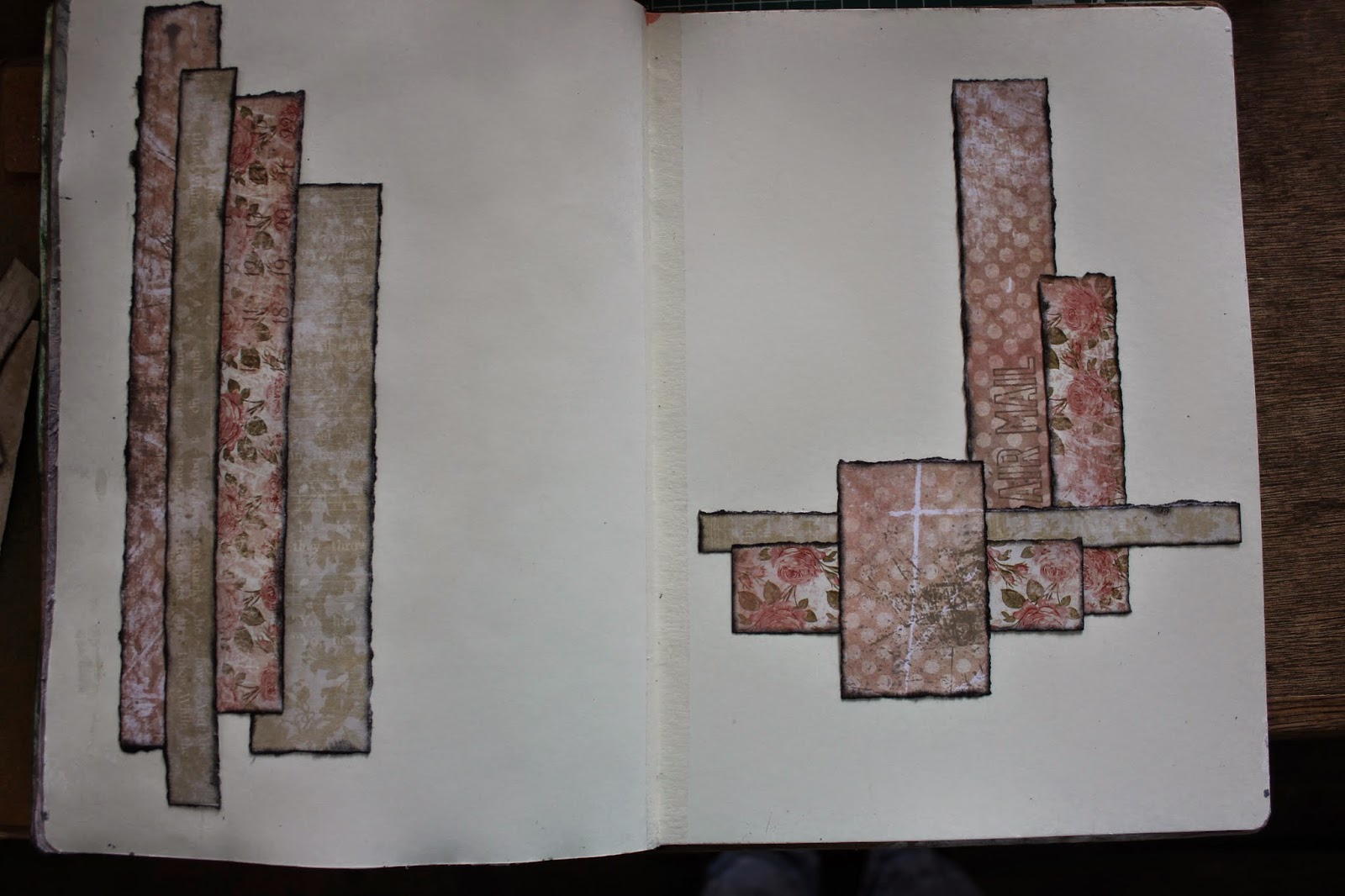 I borrowed a baroque stencil by Donna Downey from my sweet sister Annika (actually, she wasn't here so I just took it LOL), THANKS SWEETY hihi, and used it to create some texture in the background. 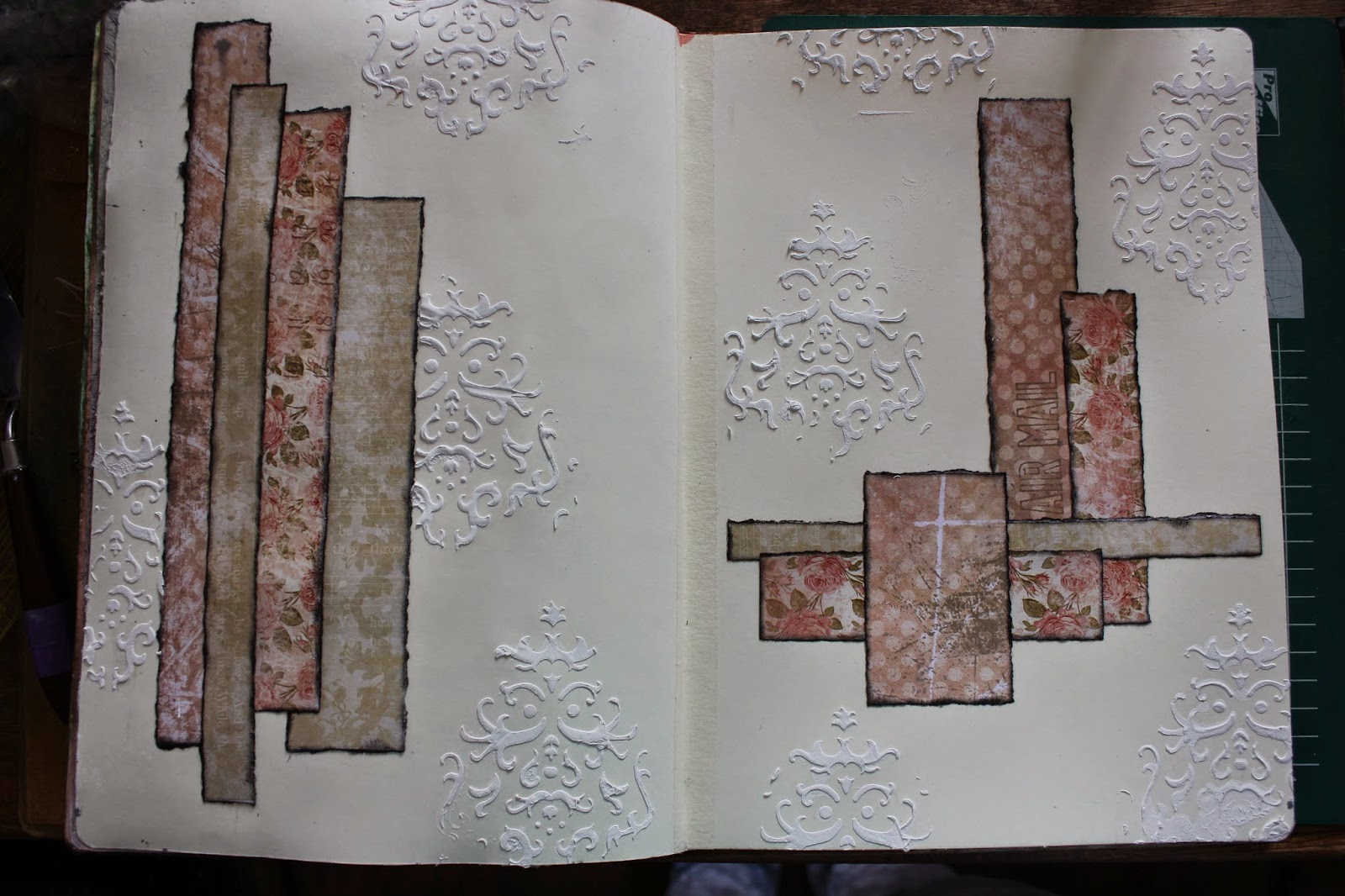 Then I created a resist in the background using Antique Linen Distress paint and a stencil made by my friend Astrid (which she sells in her webshop, and she also has brilliant sets of holiday stencils which have a smaller size and are so convenient to take along in your holiday kit, so click here to check them out SB Creatief ). 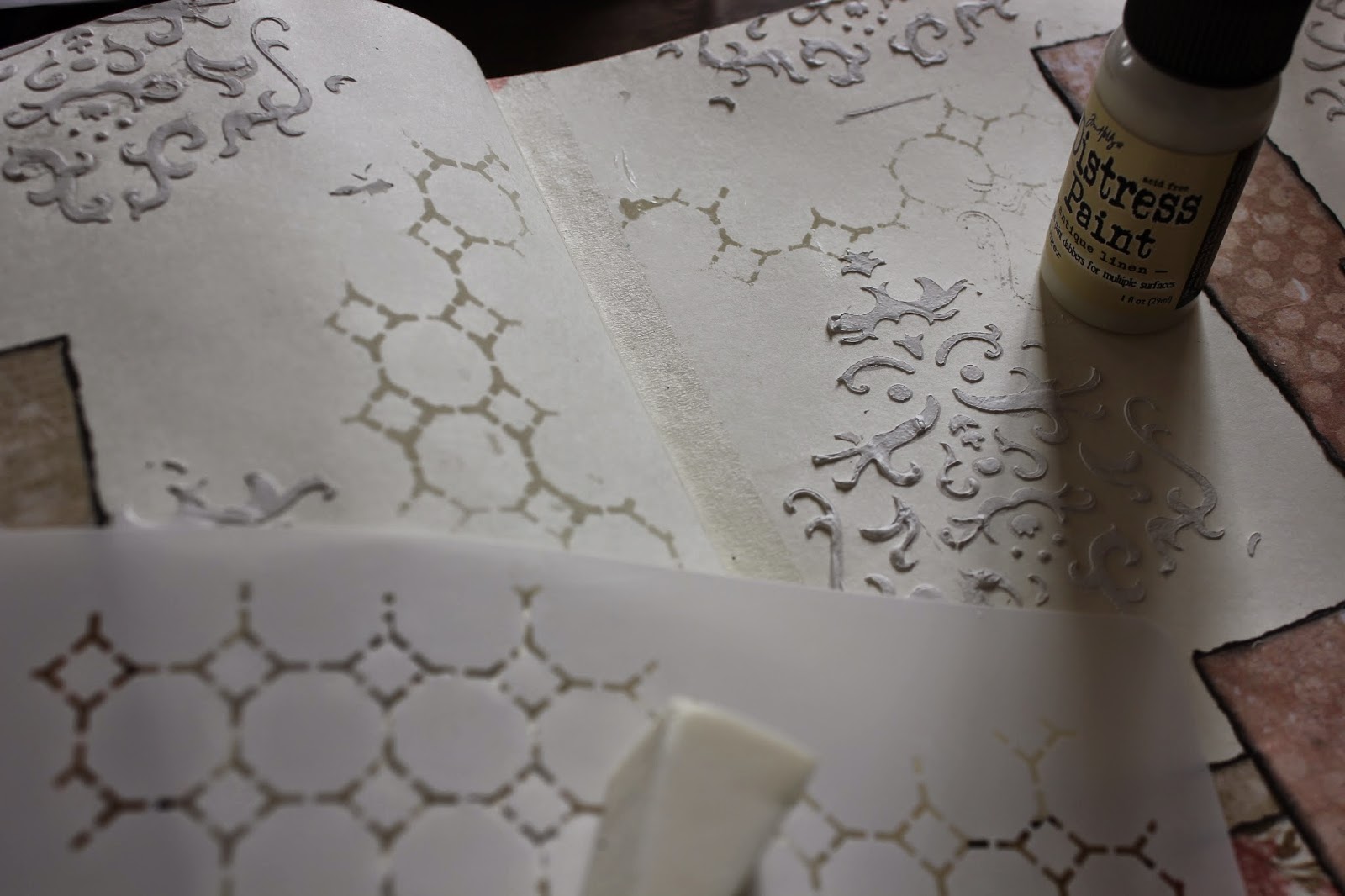 I decided there still wasn't enough going on in the background so I took a script stamp and Distress Paint Rusty Hinge and stamped some script.. 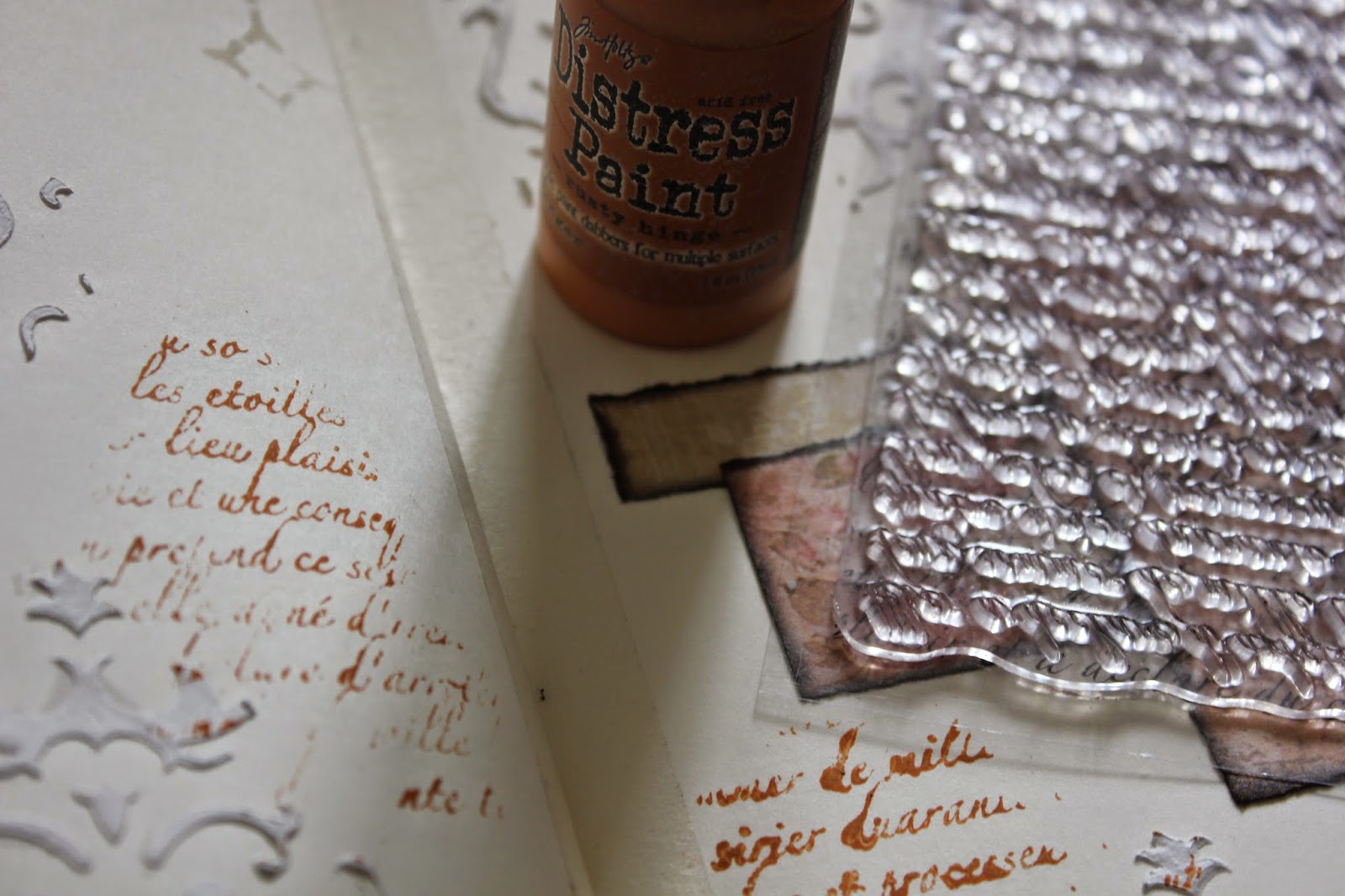 Then came the fun bit; not this Bister stuff is quite new to me; my sister ordered it for us and we have all the colours, but it does take some getting used to. I used mahogany and natural for this page, but the mahogany was much redder than I expected. 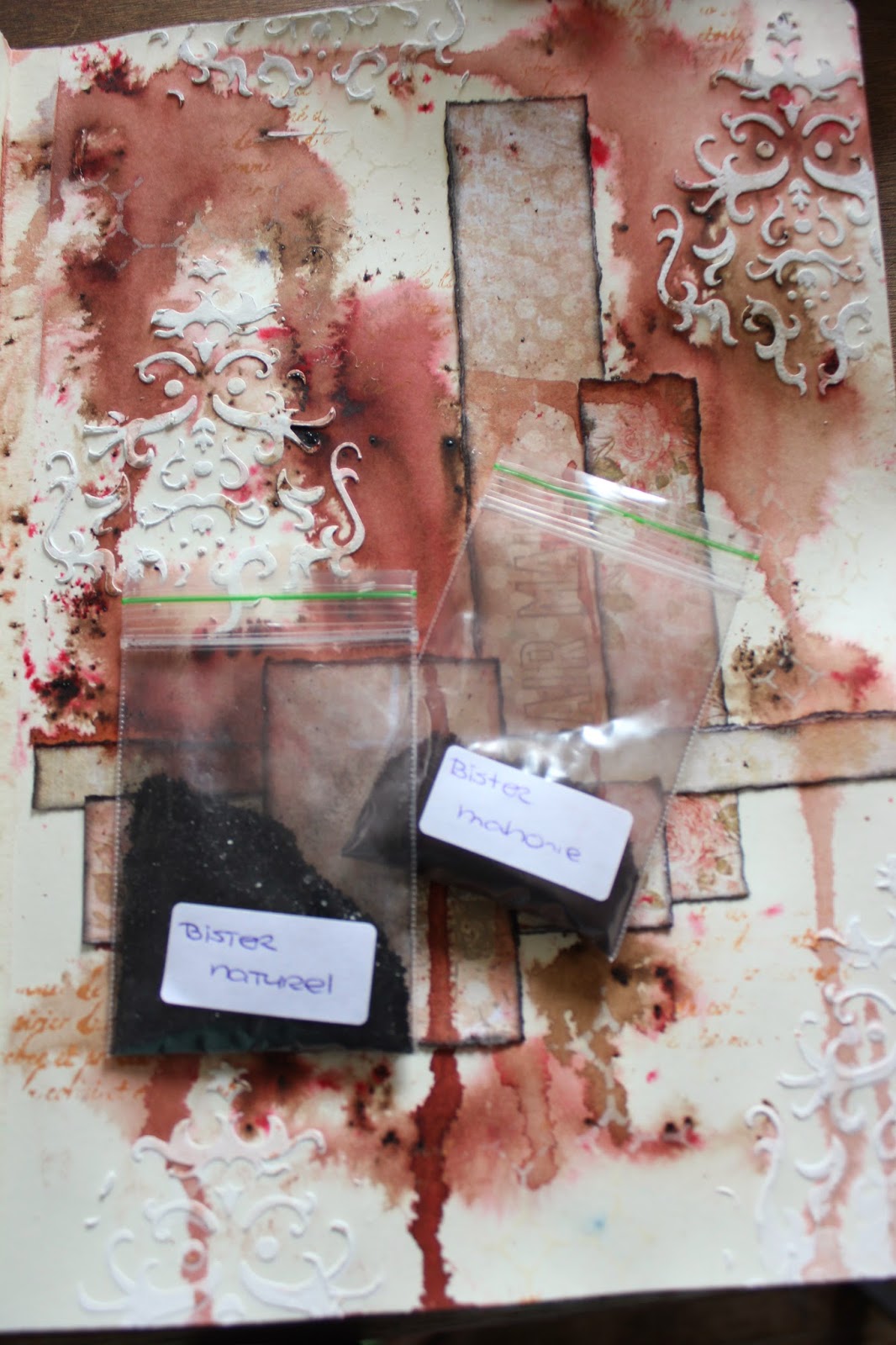 So here's the result of the spread with the Bister. For me the contrast between the colour of the background paper and the Bister was too strong so I decided to tune it down with some Lindy's Stamp Gang spray. 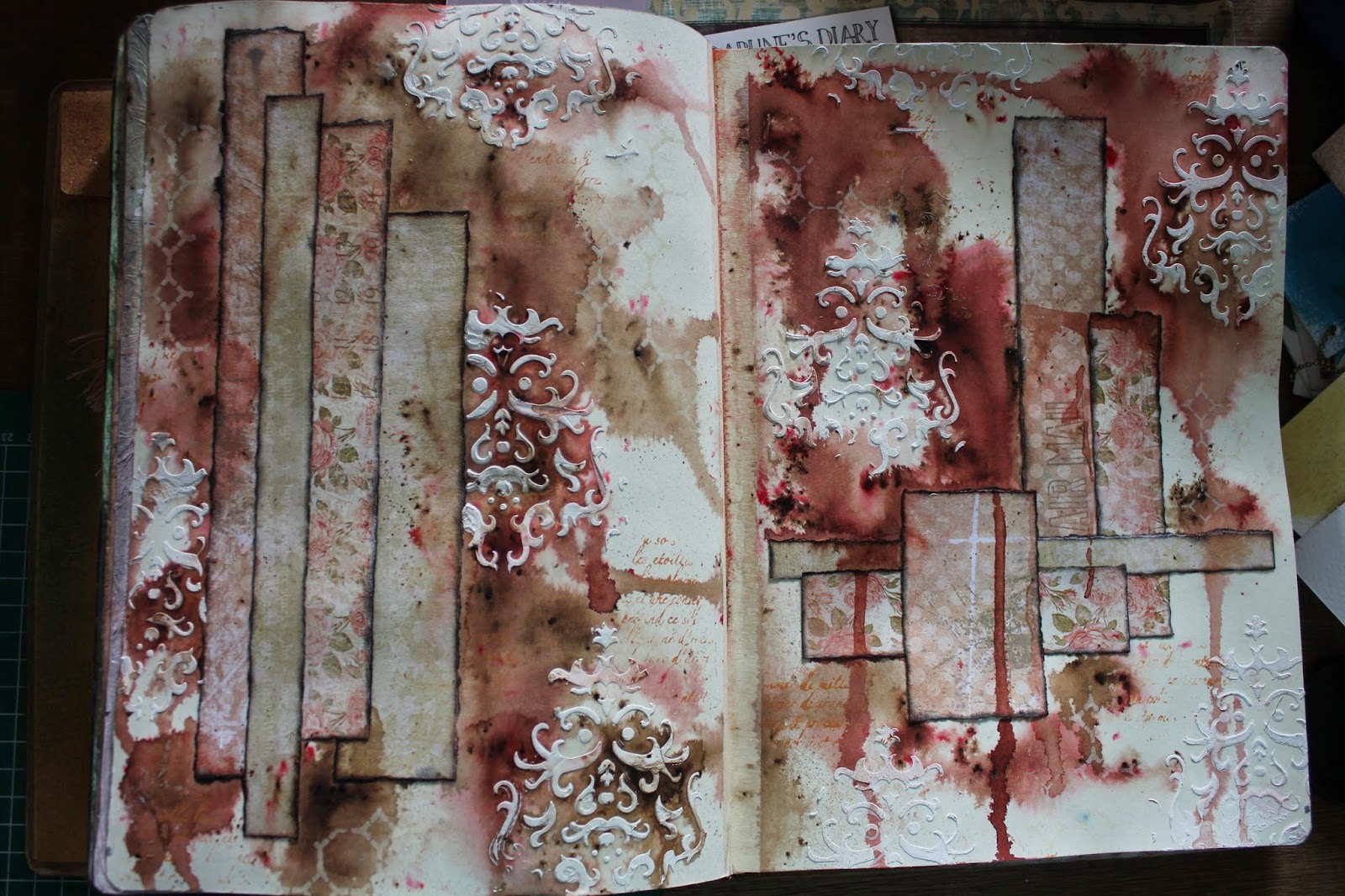 After doing so (I used Jolly Roger Red) this was the result. Much better I think. 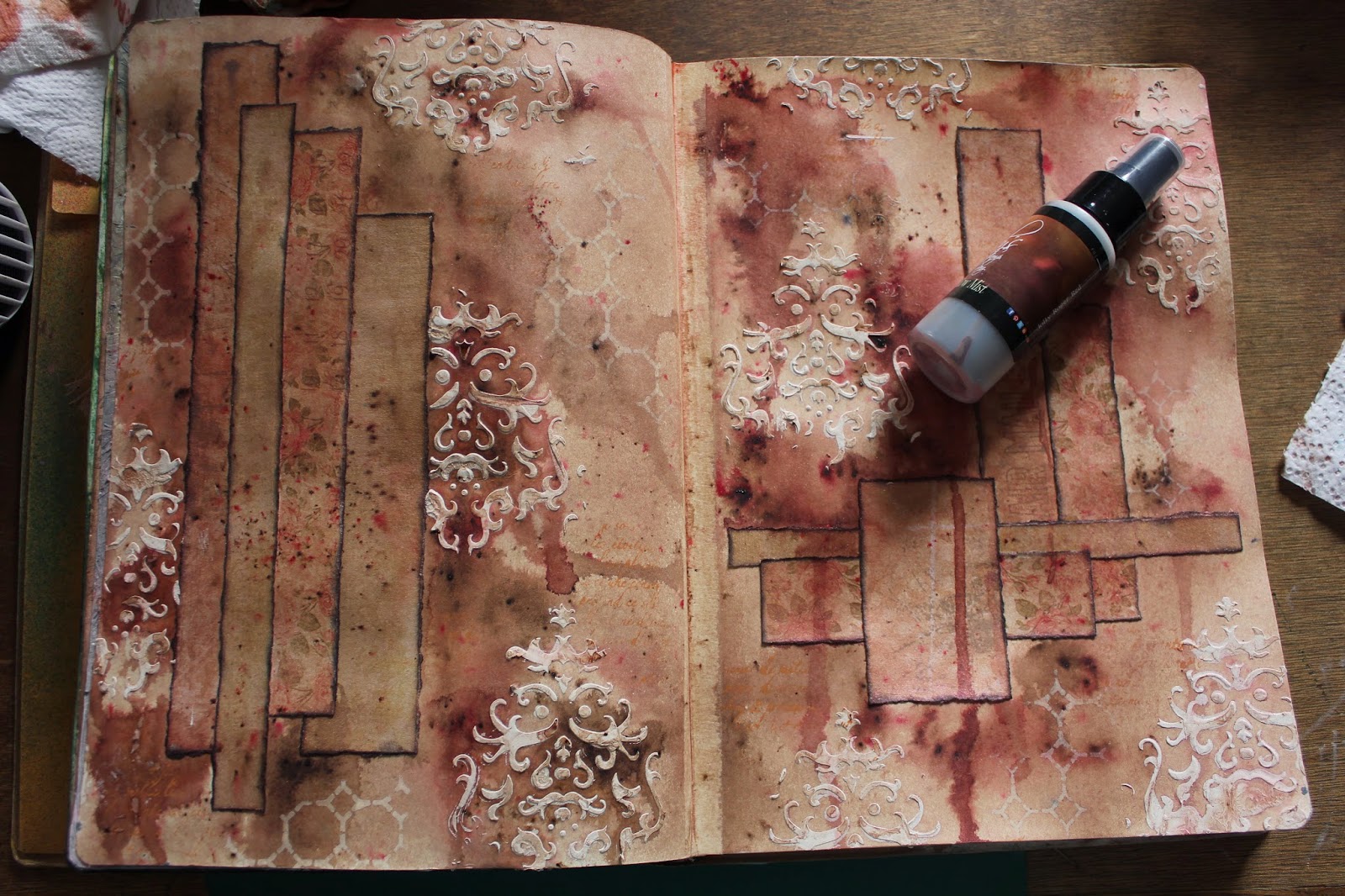 I did some stamping with the Tim Holtz butterflies. 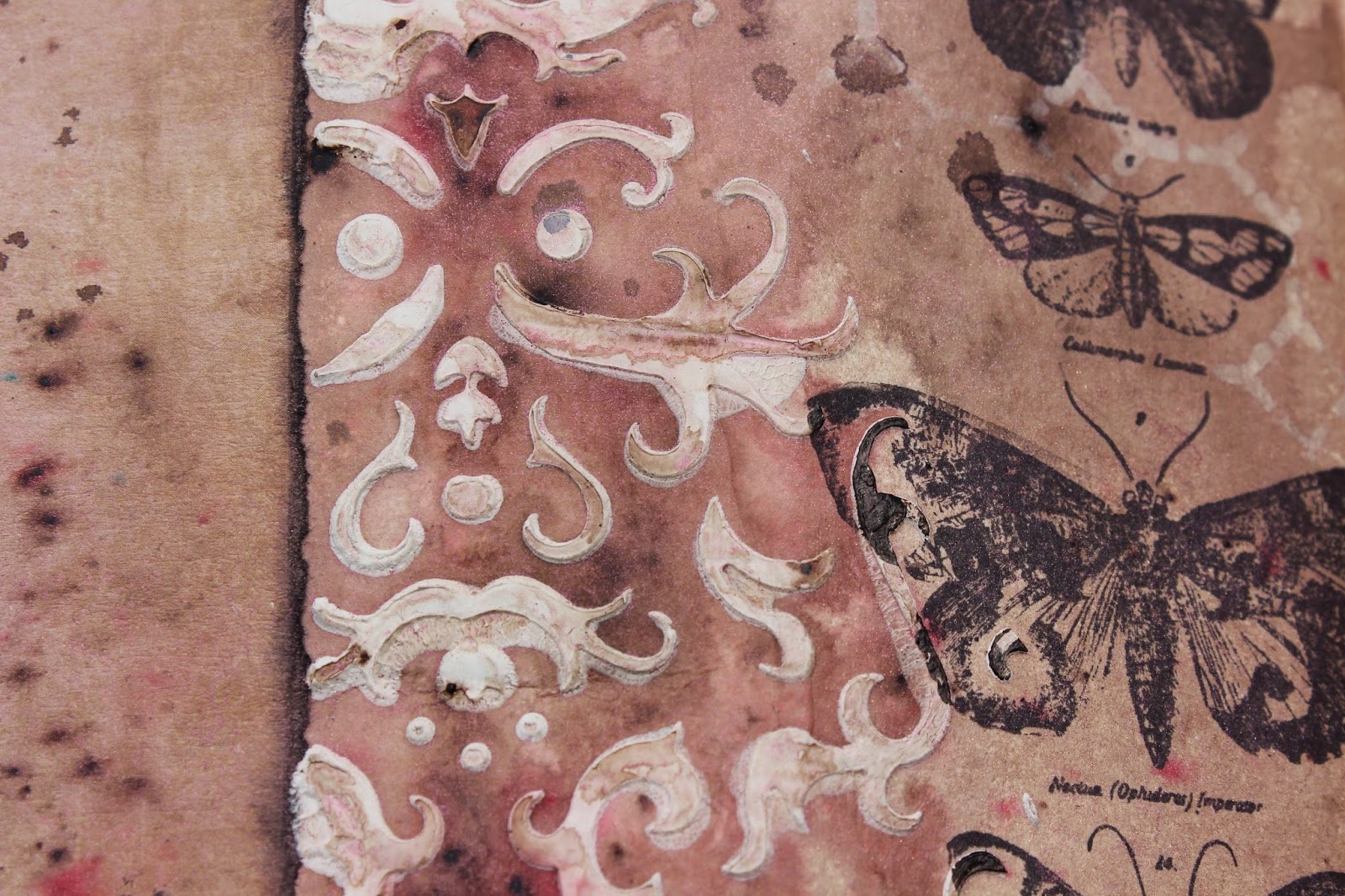 And I used the stamp with the text from that same set here and there. Both were stamped with Stazon Ganache. 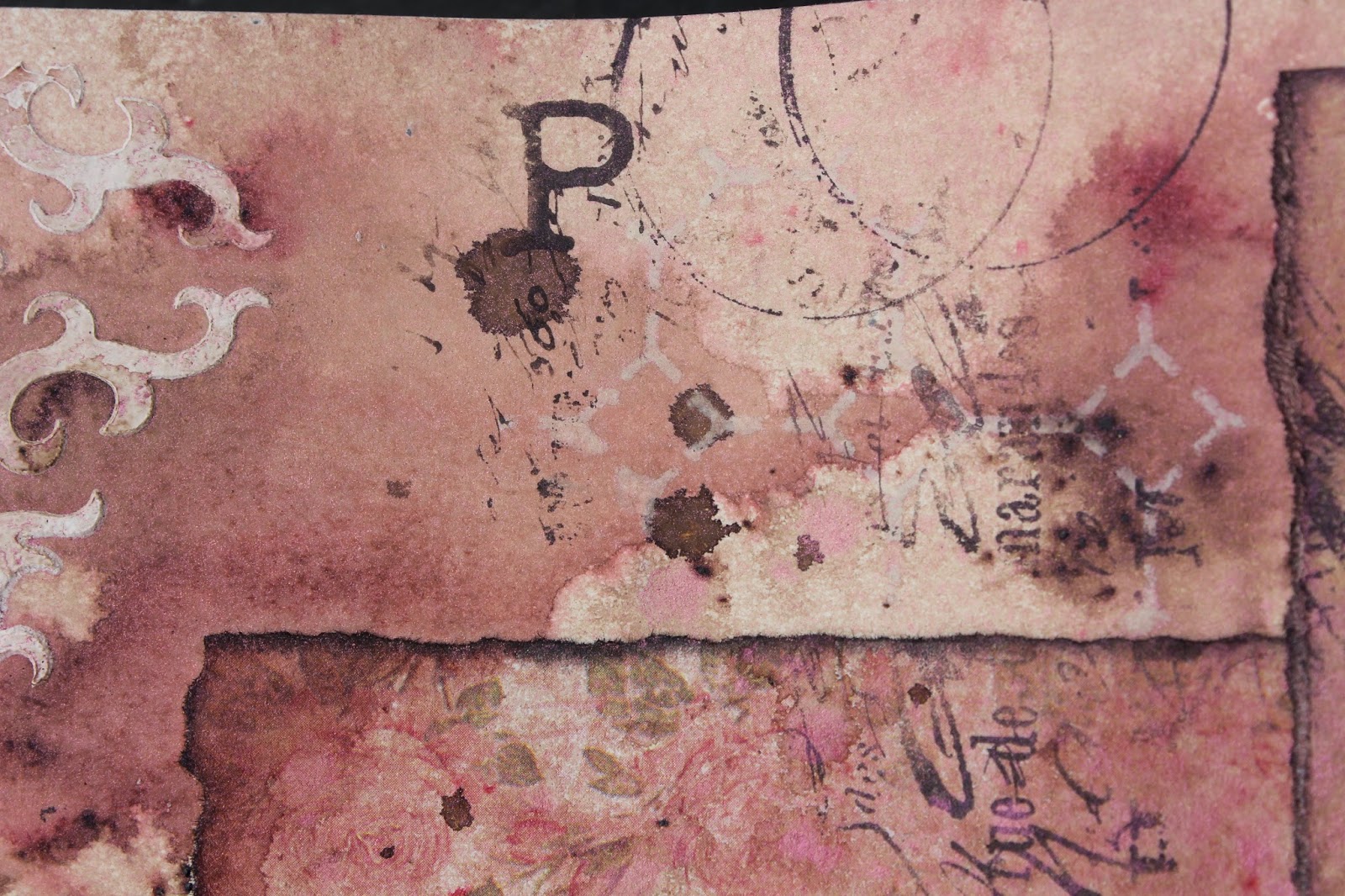 The last touch was distressing the edges of the spread using the same colour of Stazon. 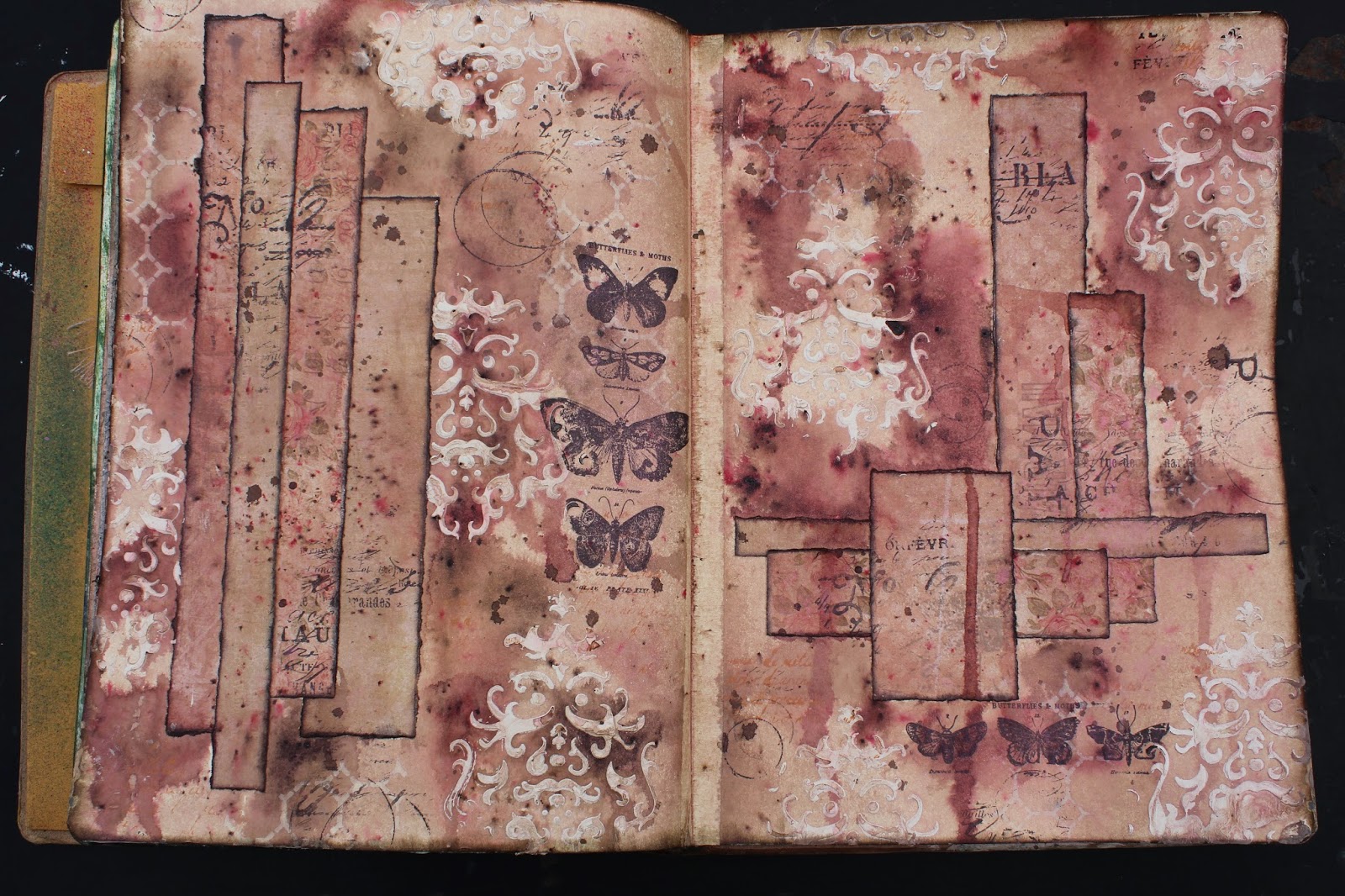 So France and blogfriends, I hope you enjoyed my step by step tut; I enjoyed making it, and France; congratulations on your 100th JOM, thanks for all the inspiration and on to the 200!! See you in October at the Craftorij retreat weekend France!!
Gepost door Unknown op 04:54 4 opmerkingen: 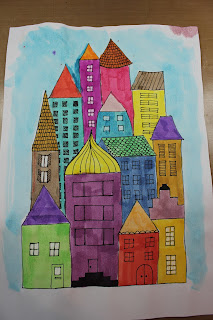 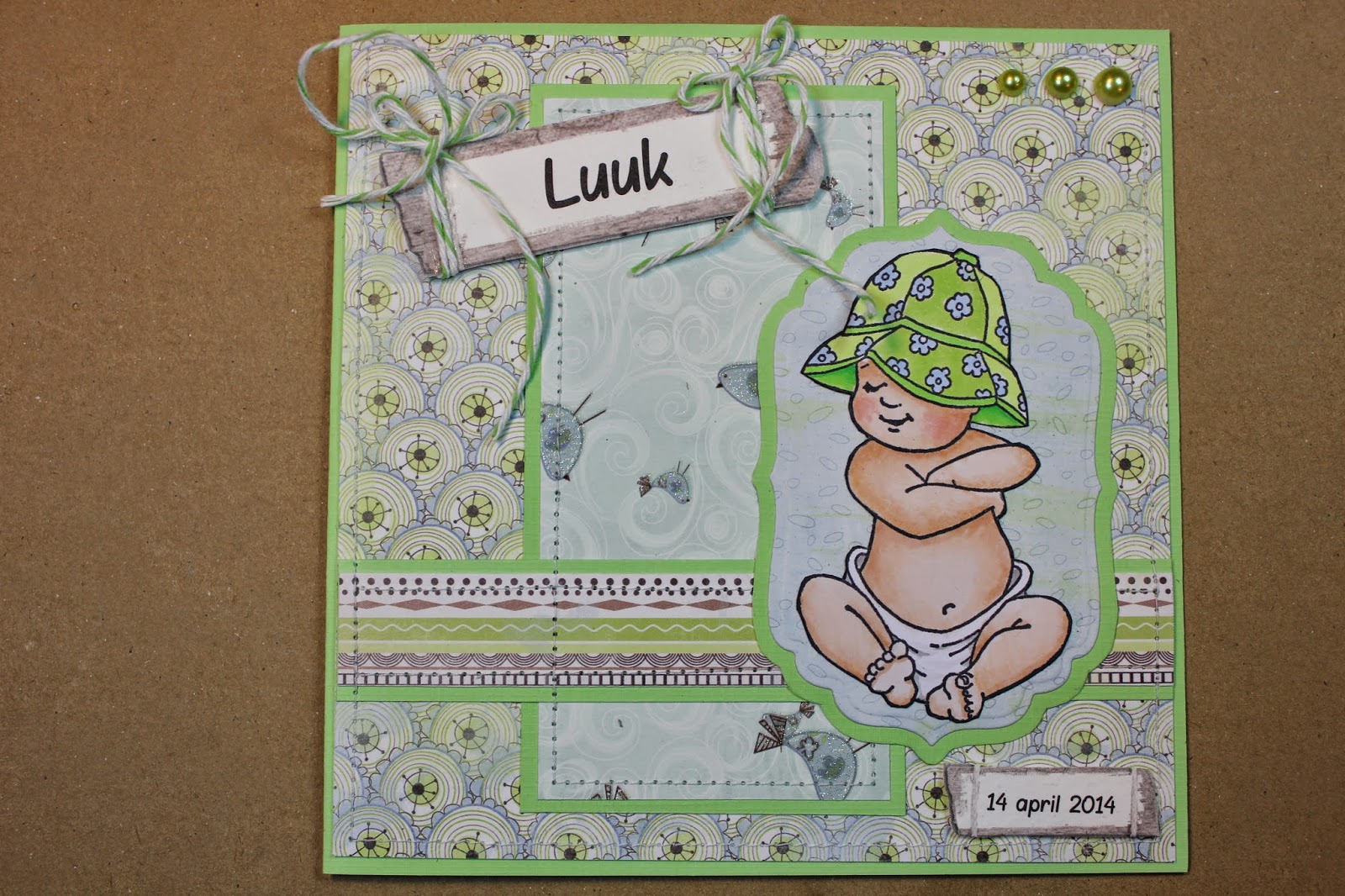